Where to start? So many great bands, so many great people, great venue, a great festival indeed! The festival, specialising in bringing old acts back to life mixed with pretty new up-and-coming bands, took place at The Bell House in Brooklyn, New York. This years edition featured bands like Exciter (reunion), The Rods, Liege Lord, Riot, High Spirits, Cauchemar, Aggression, Destructor and many more, and it was worth crossing the Atlantic ocean to catch this event. 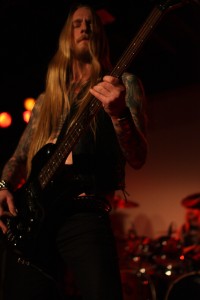 The whole festival started out with the Swedish band Nightmare City.The doomsters in Magic Circle were supposed to play, but unfortunately they had to cancel their appearance. Too bad, as it was one of the bands I wanted to see the most.
Nightmare City can be described as thrash with punk influences, which consists of members from Antichrist and Witchgrave. The gig was quite allright, energetic, but it didn’t leave a huge impression on me. Still looking forward to checking out the new MLP which had it’s release on the festival, though.

Next band on the bill was Aggression from Canada, first time playing in the US. Since their start back in 1985, they’ve only released one full-length under the Aggression-logo, The Full Treatment. Fortunately this didn’t affect the live session at all, even though their bass player didn’t get across the border, so their second guitarist and founding member Denis “Sasquatch” Barthe had, to his own amusement, do the bass. During the set, they invited King Fowley from October 31 and the man behind the festival, He Wang, up on stage to do Metal Slaughter from their first demo. They also played Forsaken Survival and Demolition from The Full Treatment and the band seemed to enjoy the concert as much as the audience did.

The biggest band this day (literally speaking) was probably Machine of War consisting of members from NME. Aggressive and fast, I guess the song Speed Kilz really sums it up. The crowd went wild on this one, moshpitting their way through the set. The name Machine of War, is taken from the first NME demo, and the special thing about this gig was that they were supposed to play the first album, Unholy Death, in its entirety. And they did, in a killer manner! Machine of War ended their show with a cool cover of Venom’s Welcome to Hell. 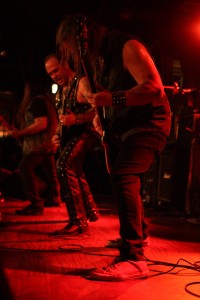 Destructor, what a pleasant surprise! With two of the original members, one of them being vocalist Dave Overkill, they really defended the old, and did a fantastic gig. Dave Overkill’s voice sounded better than ever, pounding his way through Keep the Faith, Metal Spike Deep (new songs), Sonic Bullet and Iron Curtain amongst others. During the set, Dave Overkill’s seventeen year old son was invited up on stage – it turned out it was his birthday, and the audience gave him a warm welcome while he did some background singing on one of the songs. A great moment to a great concert.

Unfortunately, I missed a out on a couple of Liege Lord’s tunes, but I did get to see some of them, like Eye of the Storm, Dark Tale, Cast Out and they also did a cover, Rainbow – Kill the King which sounded pretty good. The vocalist Joe Cameau made a very good performance, but seemed to struggle a bit now and then, especially on the higher notes. But you can’t really blame him, it’s been almost thirthy years since he started doing vocals in Liege Lord, and the high notes are really high. A good power speed gig over all.

Riot V ended the first day of the festival. The band has re-named themselves Riot V in stead of Riot after founder of the band, Mark Reale, passed away. The V stands for Todd Michael Hall being the fifth vocalist, replacing Tony Moore from the Thundersteel line-up. The only one remaining from that line-up, is the bass player Don Van Stavern.

So, what did Riot V sound like? They sounded really good, and the vocalist did a great job, but it’s almost like his voice is too good, and too smooth. I guess it’s a paradox to complain about a vocalist being to good, but it has more to do with the feeling in his voice. I want to hear more passion! There was also a woman on stage with the band, and she was supposedly doing some background vocals, but I didn’t hear her at all.

The good thing is that Riot V played a lot of songs from Thundersteel and Fire Down Under. They even played Outlaw from the last mentioned album, which I didn’t expect to hear at all, great surprise and one of the highlights. Other highlights during the concert were definitely Johnny’s Back, Sign of the Crimson Storm, Flight of the Warrior, Fight or Fall and the two songs that ended the concert, Thundersteel and Swords & Tequila. They also did a couple of songs from the new album Unleash the Fire, Metal Warriors being one of them, and they even had some guests on the three last songs. Former guitarist Louie Kouvaris joined on Warrior from the first album Rock City, and the audience had the pleasure to hear Rick Ventura on No Lies and Swords & Tequila from Fire Down Under.

An intense first day at the Defenders of the Old Fest, but what a day! Enjoyed every second of it.